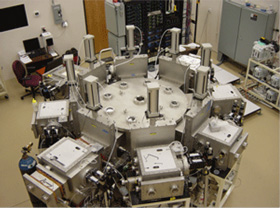 Our reel to reel deposition systems eliminate some of the most prevalent problems encountered during the manufacture of multi-layer structures onto flexible substrates:

1. Cross contamination: Despite numerous attempts to prevent the transport of species between adjacent chambers, standard roll to roll systems are fundamentally incapable of eliminating cross-contamination as the web moves between adjacent chambers. In the MVSystems reel to reel design each chamber is completely isolated from the other MPZs (modular processing zone) via gate valves. 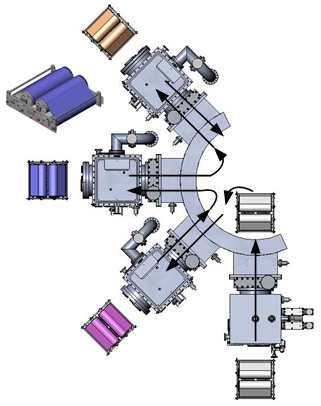 2. Flexibility to adjust parameters on any part of the process: In standard roll to roll systems the web travels at constant speed, therefore chamber sizes and process parameters (which affect deposition rates) are interlocked to produce the correct layer thickness. This limits adjustments to the process. In the MVSystems reel to reel system, each chamber is controlled independently: web velocity and all process parameters can be adjusted independently.

3. Down time: In the standard in-line roll to roll system, if one chamber becomes inoperative the entire system is down. Our cluster tool approach allows for redundancy of chambers and since each chamber operates independently, the system can remain operational while maintenance is done on one of the processing modules.

The MVSystems reel to reel design uses a cassette to hold and transport the flexible substrate. The cassette is transferred from chamber to chamber via proprietary drive and locking mechanisms which allows for web motion control during processing and safe transport between chambers. Each deposition chamber has its own drive mechanism and can operate independently of any of the other processing zones. 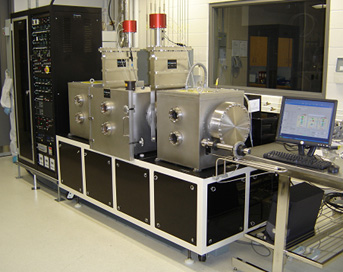 Control: Computer controlled with easy to use HMI and optional data logging.

Systems guarantees are defined in the contract and include*: